“This test proves definitively that EcoPower provides outstanding protection for engines while it protects the environment,” said Curt Knapp, senior vice president and chief marketing officer. “Simply by using EcoPower, fleet owners and managers can now be even more assured that they can protect engines while protecting the environment by reducing greenhouse gas emissions.”

In fact, for a fleet using one million gallons of engine oil per year, switching to EcoPower could reduce Greenhouse Gas emissions by 7,668 metric tons. That’s the equivalent to growing 198,725 trees for 10 years in an urban environment. Additionally, EcoPower uses base oil that requires no new supply of crude oil to refine, so nearly 588 gallons of crude oil were left untouched each time either truck’s oil was changed. That’s because each engine requires 14 gallons of fresh oil at each oil change, and it takes 42 gallons of new crude oil to produce one gallon of high-quality motor oil – while EcoPower uses base oil that is re-refined.

EcoPower showed excellent performance over the course of a million miles in real-world conditions as two over-the-road trucks in long-haul, fully loaded service traveled one million miles each using only EcoPower for engine oil. The trucks’ engines, 2007 Cummins ISX 450-horsepower EGR models, were subjected to oil-drain intervals of 40,000 to 50,000 miles, compared to the manufacturer-recommended 25,000 miles. At each drain interval, the oil was analyzed for the presence of wear metals, a sign of engine wear; acid neutralization, as reflected in a calculation known as “Total Base Number”; and viscosity maintenance, an important indicator of the oil’s ability to prevent corrosion and provide engine protection.

“Even in the final oil analysis of this test, when you may expect to find the most signs of wear in an engine, EcoPower maintained a total base number of 4.9. That’s well within limits and showed a substantial ability to neutralize harmful acids that build up in used engine oil and cause corrosion,” said Rodney Walker, technical director of oil re‐refining. “There were also completely acceptable levels of wear metals, and just like in previous tests, EcoPower was proven to maintain its viscosity, even at the end of each oil-change cycle. Viscosity maintenance is critical to oil protecting an engine, and illustrates EcoPower’s exceptional protective properties.”

Upon completion of the million miles, both truck engines were completely disassembled and inspected, where the lack of wear to internal engine parts was clearly visible.

“In this engine, I see no signs of distress anywhere,” said Pat Fetterman, industrial liaison, Infineum, a leading global additive company and third party that conducted the engine test. “In fact, these [engines’ original] cams meet the visual guidelines for reusability. And when we rebuild these engines … the cams are going right back in the engines, and they'll be going back into service with these cams, even after a million miles.

“Based on what I’ve seen, looking at the condition of the cams, the followers, the ring and liner interface disassembled, these engines are in the same condition as I would expect for an oil operating at a million miles with a virgin base stock.”

The million-mile test was an extension of an identically designed half-million-mile test that compared EcoPower to two leading, super-premium, heavy-duty diesel engine oils made from crude oil. In that test, EcoPower significantly outperformed the competition, showing as good or better performance in nearly every measure of engine protection and performance.

Photos of the engines, additional data and more information about this groundbreaking test are available at http://ecopoweroil.localhost/fleets. 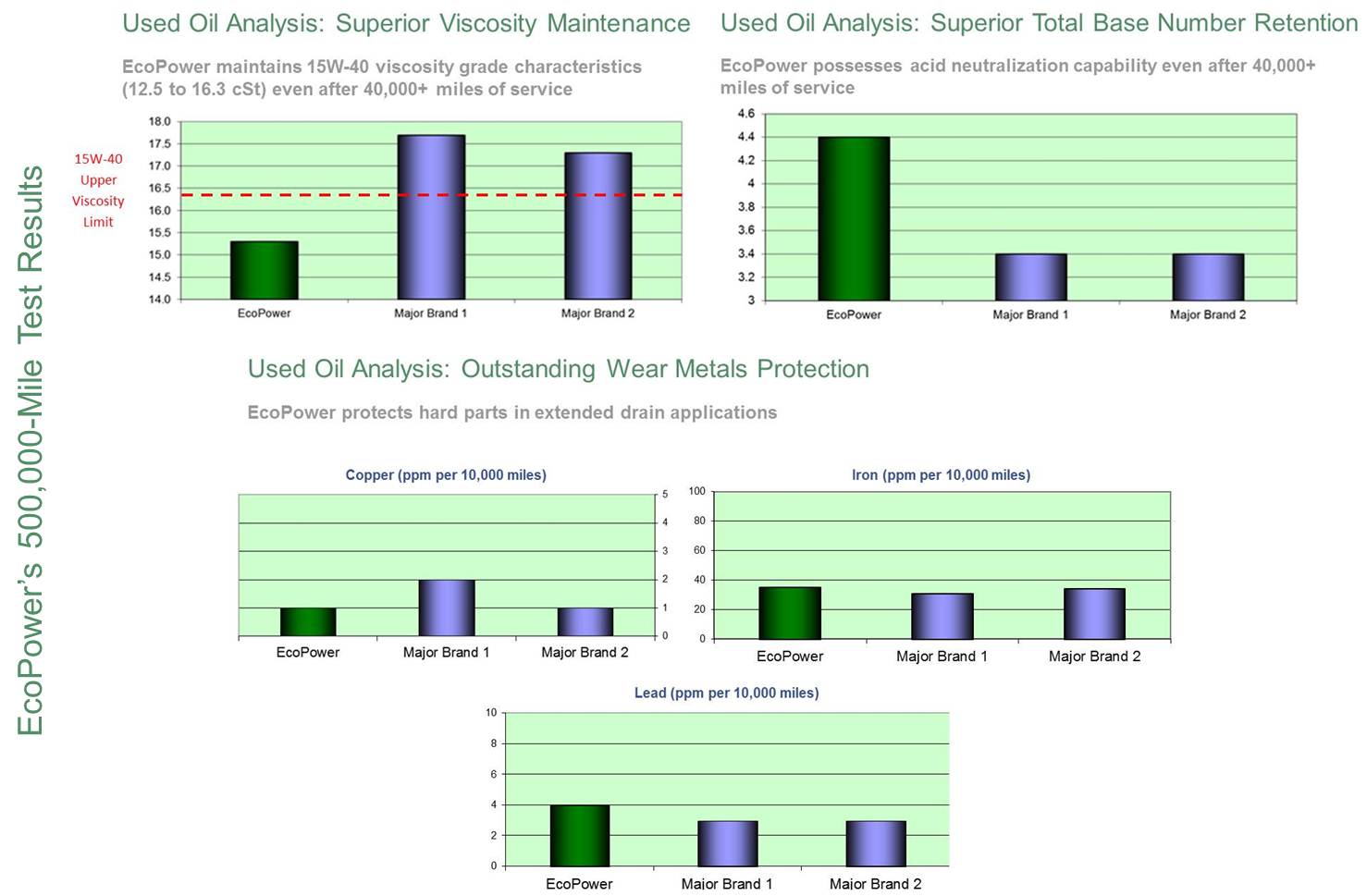 Results of EcoPower’s 1,000,000-Mile Test
EcoPower performed so well in 500,000 miles of testing that the test was extended to see how well it would protect the very same engines for one million miles. Infineum International LTD, a major global additive company and Safety-KIeen’s third-party testing partners, maintained the same extended drain intervals. The trucks had only routine maintenance and repairs, and after one million miles, EcoPower HD 15W-40 CJ-4/SM delivered, yet again, exceptional engine cleanliness, wear protection, total base number and viscosity. 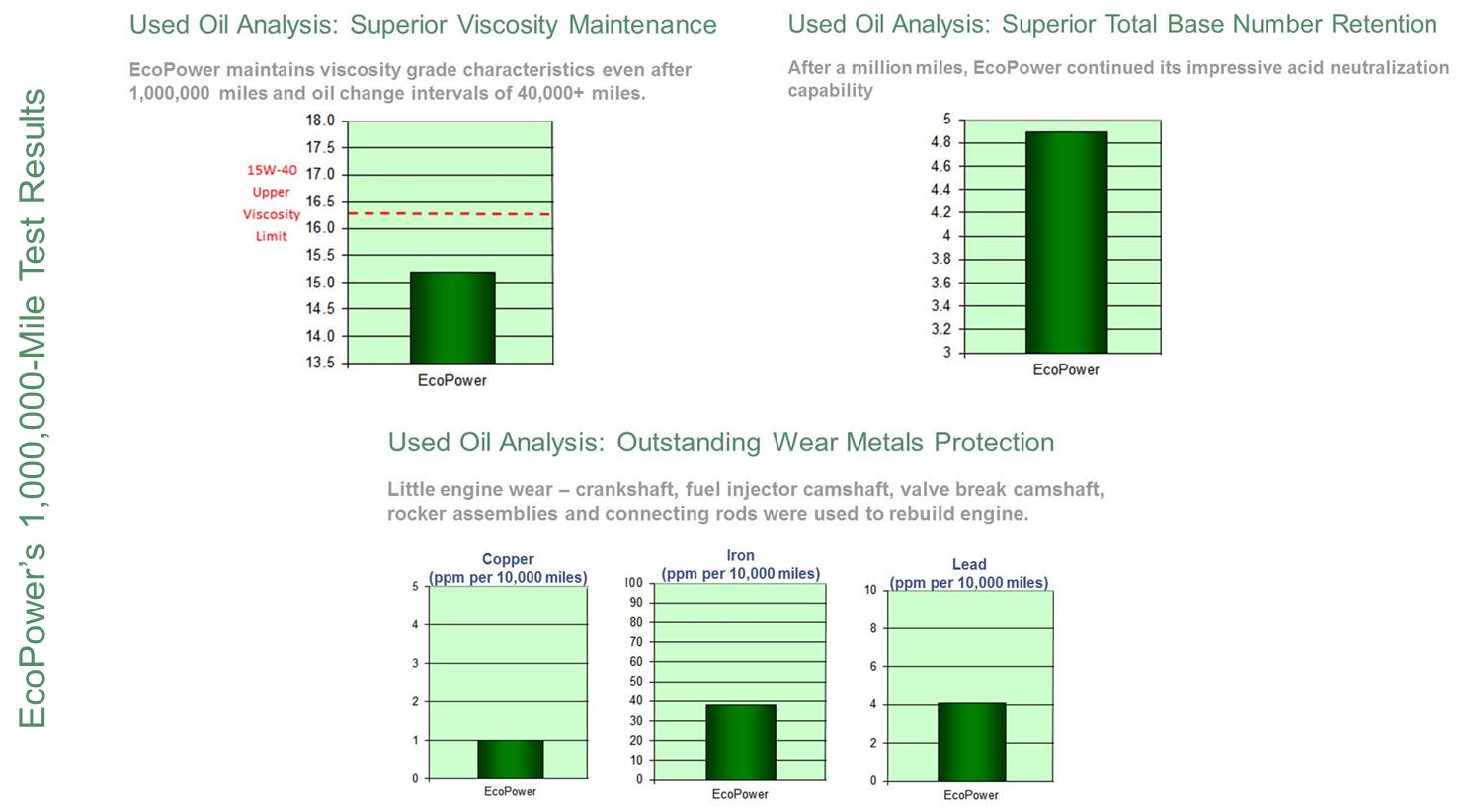 About EcoPower®
EcoPower is more than just engine oil. It is part of a much bigger effort by Safety-Kleen, the largest collector and re-refiner of used oil in North America. In 2011, Safety-Kleen collected approximately 200 million gallons of used oil. EcoPower doesn’t just conserve resources, it protects them by keeping used motor oil out of our land and ground water, making it truly an oil change for the better. For more information about EcoPower, please visit www.ecopoweroil.com.

About Safety-Kleen
Safety-Kleen is a leading provider of environmental services to commercial, industrial and automotive customers, and the largest re-refiner of used oil and provider of parts cleaning services in North America, with approximately 4,200 employees serving more than 200,000 customer locations in the United States, Canada and Puerto Rico. Safety-Kleen delivers a set of sustainable services to meet the required, recurring environmental needs of its customers. For more information about Safety-Kleen, please visit www.safety-kleen.com.